Inside the Dungeon! Boardgame

The reboot of the Dungeon! boardgame is almost here. I'm not sure but the dungeon looks smaller than in the older incarnations of the game and it looks like there are less rooms.  It also looks like some of the rules are printed right on the board (which is probably a good thing) and I can't make out what that row of numbers on the side would be for. Overall I do like the new look. 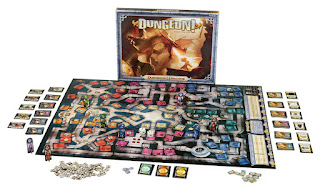 A great list of suggestions about making your role playing experience better.  This is by Sean Patrick Fannon who was the editor for the DriveThruRPG newsletter. He is leaving his post and he left behind this insightful message.

I would recommend you all to read this as these ideas could really improve our game.

It's been a long while since I wrote one of these myself here. It seems fitting, however, to close out my run with some final observations that I hope will help all of you enjoy gaming more.

Cheesy as they are, lists are fun. So here's the sharp cheddar, friends -

1) Remember it's a Game. At the end of the day, you are playing. The very essence of play is to engage in an activity that is supposed to be fun for everyone involved. Seek that fun, grab hold of it, and enhance it in any way you can.

2) Remember it's More Than a Game. Let's face it, most gamers put a lot more of themselves into an RPG than they would ever invest in a game of Monopoly, Mario Cart, or even Blood Bowl. There is a legitimate and compelling emotional commitment in the act of roleplaying, and that means what happens to a character in a story will affect the player. It should; that's the magic of the hobby.

3) Play Well With Others. This is a shared experience almost by definition. Despite the reasonable tendency to get lost in your character's head, you owe to everyone else who's set aside a few hours of their day to acknowledge and support the need for everyone to enjoy themselves. Before stabbing that back, stealing that potion, or going off on the king because you've had a bad day at work (and, thereby, have made the entire band of heroes into outlaws), take a moment to think it through. If it's going to screw everyone else over, is it really worth it, even if you're doing it “in character?” Seriously. You know what I mean here.

4) Be There for the Game. Don't be the one who shows up at the table, opens your laptop to your favorite MMO, Facebook game, or fanfic site and “phone it in.” If all you're really there to do is hang out, plugged into the `Net, and toss a few dice, find an online craps game and leave the seat open for someone who wants to actually play a character in a shared story. This kind of behavior is horribly disrespectful to everyone else, and especially your Game Master.

5) Be a Character. No one expects you to be a master thespian, but you can pretend to be someone who actually reasonably belongs in the setting. If you're playing heroic fantasy, nix the modern slang. If you're playing space opera, maybe not so much with the F-bombs? You don't have to do accents (though they really do help if you can), but try to talk differently than you might to a coworker at lunch about the latest sports event of your shared interest. More importantly, make decisions that come from the mind and insight of your character, not your more omniscient perspective of the bigger picture.

6) Metagaming sucks! Three of your teammates are down in the basement of an office building, attempting to repair the elevators. Your character is in a submarine, 2000 miles away, with no radio contact. Quit telling them how to open the main breakers! You're not there, you're interfering with the scene, and you're screwing over the roleplay. How is this not obvious?

7) Help the Game Master. It's not easy, which is why only a fraction of gamers ever bother trying to do it. Between the need to be a master of the rules, a crafter of interactive stories, a world-builder, a referee, a scene director, and any number of other tasks, GMs can get a bit overwhelmed. Getting them a soda, helping move the miniatures on the map board, and cleaning up after the game are far more sanity-saving than you might ever know.

8) Go For It! Quit analyzing ever single move like a chess master, and quite worrying about the minutiae of all the possible modifiers. Will it look awesome on a movie screen? Can you see your character looking like a total badass, no matter what happens? Then do it! Not just because your GM will appreciate you adding zing to the moment while your fellow players start thinking of what they can do to look just as cool, but moments like that are what the best gaming stories are made of.

9) Quit Complaining! You didn't like that ruling. OK. Make a brief, respectful case. Maybe the GM did forget something, and if so, he'll probably appreciate the politeness and the memory boost and make a change to fix things. If he doesn't, write a note to talk about it later, then let it go. If you gotta, go outside and yell at a tree; no one at the table wants to hear about it, as they are there to, you know, play a game.

10) Game With Friends, Befriend Those You Game With. You share hours together, weaving tales, experiencing life and death together. How in the hell are you not friends with these people? Do things together. Have dinner parties. Go play mini-golf. Vacation together. Seriously, you all know each other better than just about anyone else can; cherish that and make the most of it. Few people in life get to have as many close friends as you can just by embracing the fellowship of people you game with.

This is some of the best advice I feel I can leave you all with, so I will leave you with that, one one final thought.

Roll the dice, have some fun.