The Story So Far... Inside Castle Riveon

The Story So Far…
Goldengrass the 24th – 25th, 1845
Outside the tomb of Minress Curthor, Svarnos came up with an ingenious plan to deal with the shadowy undead rats within.  He instructed the strong warriors of the group to move some of the marble sarcophagi from the walls of the chamber they were in to create a barrier to prevent the swarm from entering the room. The party could then fight the creatures from on high if they stood atop the sarcophagi.  When the doors would be opened he would first blast the swarm with a burning hands spell.  The plan worked brilliantly as the flames of the spell consumed the entire swarm and the rats were burned to a crisp.

Inside the now unguarded tomb the adventurers were able to search the carved sarcophagus holding the remains of Minress Curthor.  The corpse was just dry bones wearing a rotted cloth-of-gold shroud with wispy strands of golden hair still attached to its grinning skull.  Yet, on the skull was a great treasure, a delicate tiara of platinum set with black opals.  The treasure was taken and the party decided it was time to head to the long corridor that they discovered.  The corridor they believed was the secret passage that led into Castle Riveon.

The 12’ high arched corridor was stoutly constructed by dwarven stonemasons yet time had still taken its toll on it.  Water dripped from the ceiling in places and roots had caused the stone blocks to crack and crumble which created minor cave-ins.

They walked the corridor for a long stretch of time when Galifynakus noticed a refection on the ceiling directly ahead of them in the light from their lantern.  It turned out to be a patch of green slime growing on the ceiling.  The dwarves Gjord and Norgrim both knew of the acidic fungus, as it was a bane to dwarven miners.  They also remembered that fire was the best way to destroy it.  Using a torch, oil, and Svarnos’ burning hands spell again (recalled by the magical pearl of power) the disgusting slime was eliminated.  In the process some of the nasty stuff slopped onto Galifynakus’ boot, destroying it, and burning the barbarians foot underneath.

The party continued on and finally came to the end of the passage where there was a sturdy iron ladder leading up to a solid marble trap door above.  The group decided to rest and replenish their spells before trying the trap door so they spent the rest of the day in the underground passage. The next day they carefully ascended the ladder into the remains of a ruined chapel dedicated to Varcan.  The heroes were within Castle Riveon!

In a small adjacent room they found a prayer book and some useful clerical scrolls hidden behind a loose brick in the hearth.  The old map of the castle that was acquired by Eldan was produced and the party could see exactly where they were inside the stronghold.  The plan was (as usual) to use the ever-faithful familiar Jarvis as a scout with Svarnos reporting back what the cat was seeing.  Lono picked the long disused lock on the doors that led out of the chapel and the cat slunk through the doors to scout around.

Immediately the sound of a door opening behind the cat led to him seeing a strong-looking manacled dwarf being led by two black orcs through the hallway.  The cat hid down another turn in the hall.  Doing so caused him to pass a most peculiar door that was made of reddish colored metal with the image of a bearded horned demon-like face in its center.  As the cat passed, the mouth of this face opened and said, “Oh! A kitty cat.”  Jarvis, having no time for talking doors, ignored this and doubled back down the hall after the orcs and their captive.

Jarvis saw them enter the large wood and iron doors that led to the Great Hall and he was able to peer in after them as the doors were left ajar.  The dwarf was led down a many pillared hall to stand before a figure seated on an ornate raised thrown flanked by tapestries.  There were several orcs milling about and four armed half-orcs at the foot of the throne.  The thin man upon the throne wore clothes of gray with a voluminous cloak and cowl that was drawn over his head keeping his face in shadow.  Only his eyes that seemed to glow with a faint blue light could be seen under the hood and a gray beard hung down to the middle of his chest.  The man questioned the dwarf and asked him with a mocking voice if he still refused to fight in the arena.  The dwarf only glared at him.  Angered that the prisoner wouldn’t answer he told the guards, “Feed him to Morgor.”  The orcs roughly grabbed the doomed dwarf and began to take him out of the hall towards the castle courtyard.  Jarvis ducked out of the way and returned to his master hiding in the chapel.

The adventurers had an argument about whether they should save the dwarf or not.  Fionnula, Martijn, and Lono were the most opposed to the idea for they felt that it would alert the guardians of the castle to their presence.  Svarnos and Gjord were determined to try to save him however.  It was decided that Lono and Jarvis would go to the courtyard doors and try to see what could be done.

They crept to the doors without alerting anyone and looked out.  The dwarf was being bound to a statue in the center of the courtyard.  The sound of loud clanging metal that the party heard before when they saw the top of the castles High Tower dome peel back began to sound again.  The flying monster was to be released!

So, the party determined to continue with their stealthy exploration of the castle.  They would try to enter one of the bedrooms and climb up the chimney to the roof of the structure if possible.  From there maybe they could find a way into the High Tower.

They made their way to a bedroom that was richly furnished although a bit musty.  The fireplace and chimney were large enough for a man to fit through, although it would be uncomfortable and sooty.
Lono was the first sent up and he made it to the bedroom on the second floor.  He had to remove a grate that held old chunks of burnt wood that was blocking his progress.  He lifted this and set it into the bedroom he was climbing into.  To his shock he found that this room was occupied.  A comely young woman with black hair and green eyes was sitting bolt upright in the bed with the blanket held tightly in her fists up to her chin and look of terror on her face.  The soot covered rogue clambered into the room and said, “Don’t worry, I’m just your friendly neighborhood thief passing through.” The woman screamed, shot out of bed, and ran to the door.  She began to cry out and pound on the door but it seemed that it was locked.  Now that Lono saw her fully he could see that she was dressed in an immodest slip of a nightdress as if she had been awaiting a lover in the bedroom.  He could also see that her back bore the mark of the whip upon it as well.  Lono accosted the woman and pulled her away from the door.  He treid to calm her but she kept crying out, “Illnath, Illnath!”  Lono could think of nothing else to do so he slugged her.  It took a couple punches (Lono is a lover not a fighter) but she was finally knocked out.  Lono shimmied back down the chimney and told the party what happened.  They’re reaction was one of horrified amusement.

The whole group came up the chimney then.  Svarnos cast a charm person spell upon the young lady as Fionnula revived and tried to comfort her.  They learned that the woman, Shianna, was abducted from her family’s farm near Arrain.  From what they could tell Illnath was apparently using her as a sex slave and he visited her almost every night.  She was kept prisoner in this room although she sometimes was sent to work in the kitchen with other slaves.  The party noticed also that she seemed to have a strange devotion to Illnath and that she did not really speak ill of him calling him her lord and master.  It was his servants that she feared.  The heroes realized she was already under the effects of a charm spell from the illusionist.

While they were talking there was a knock on the door and it opened with a goblin carrying a tray of food.  The creature barely set foot in the room when Gjord brained him with his hammer.  They closed the door again.

So now, with a twice-charmed terrified slave girl and a dead goblin lying upon the bedroom floor our heroes began to formulate a plan.
Feel free to add anything you want in the comments and let me know if I missed something.
Posted by Eugene Jaworski at 2:50 PM No comments: 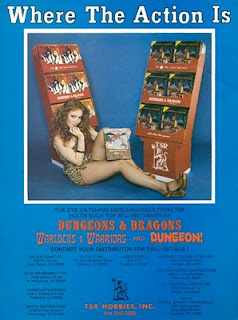 Check out the Useful Links section in the sidebar for the new file and PDF page.
There you can download character sheets and check out the new layout of the Elethian Calendar.
Hopefully it'll make more sense now!
Posted by Eugene Jaworski at 6:18 PM No comments: