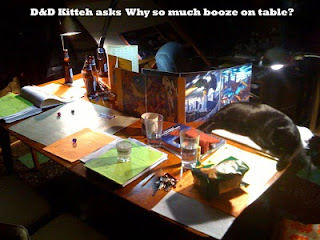 Posted by Eugene Jaworski at 2:46 PM No comments:

The Story So Far XII

NOTE: You may notice many more details in this synopsis than you remember.  Be assured these are all thing that I want you to know. -EJ
Festival of High Summer
Day One
1845
Our heroes awaited the festivities that would begin as soon as Wyrlos began to rise into the sky that evening.  Galthran's acolytes Faysa and Ulath set a large oaken table outside the lodge and a large fire-pit was prepared.  Galthran hunted early in the day and returned with a deer that would be prepared for the festival dinner that evening.  The druid also brought out some barrels of hard cider that he had made for the occasion.
Soon other friends of the druid began to appear.  A younger red haired druid that went by the name of Khorgal armed with a scimitar and wearing leather armor with robes of a brown hue arrived first.  Later, four elven travelers from the Silverwood strode into the clearing.  They wore simple tunics and trousers of silver and green colors and were armed with long bows.  They introduced themselves as Galadren (obviously the leader), Lamial (who also bore a mandolin amongst his gear), Arost, and Elil (an elf-maiden that brought a flute with her).  They had all come to spend the festival days with the druids.  Galadren also announced that he had brought several bottles of elven feywine to share amongst the revelers.
The elves and druids performed some rites and observances within the stone circle as dusk approached.
The night finally arrived and Wyrlos rose up in all its majesty. 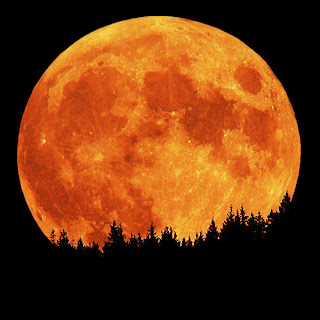 All who drank the feywine were soon unable to see as the glowing echo intensified and soon drowned out all other vision.  They then fell into a trance where they muttered strange cryptic phrases in archaic elvish.  After this they fell into an enchanted sleep and were subject to the strange prophetic dreams that the wine brought.
NOTE:  If you could all do me favor and enter your dreams in the comments I would appreciate it, as I don’t have all the descriptions with me. –EJ
Festival of High Summer
Day Four & Day Five
1845
The rest of the festival days were anticlimactic after that night although Lono did consume of the feywine on the following night.  His half-elven blood served him well however and he resisted the effects of the potent wine although he still had a strange dream.  Martijn stood firm on his decision and kept in control. Lono and the grigs had some fun at Gjord and Galifynakus’ expense as they kept arranging their sleeping bodies in awkward positions of embrace.  Martijn looked upon this tomfoolery with disdain, which made them all laugh harder.
On the final night the elves said their farewells and used the fey crossroads to return to the Silverwood.
2nd Day, Goldengrass the 9th, 1845
Later that day Galthran led them to the edge of the forest to return to the road back to Sulthe.  Before they departed Galthran said he was glad to have made new friends and he gave them each a carved wooden oak leaf on a woven necklace.  He said that no fey creatures of the Ivy Forest would harass them if they wore these.  The party thanked him for the gift and the hospitality he had shone.  They then proceeded northward to Sulthe to find the elf jeweler Rumil.
Near dusk they knocked on the jewelers door and he let them in.  Rumil was happy to see them as it had been some time (25 days to be exact) and the elf was worried that they did not survive their foray into Gormoon’s ruined tower.  They showed him the recovered sapphire and the elf’s eyes shone with delight.  He said that he would have the gem cut by tomorrow evening.  So the party left him to his work and they left their horses behind, as the elf had taken good care of them (especially after the small fortune they left behind for their care).  They proceeded into the city to find an inn.
They got into the city right before the city guards were about to close the gate for the evening.  They went to the Laughing Ogre a small cozy inn located near the south gate owned by two sisters that are known to have some magical talent.  Their names are Beruna and Leanna and they both are middle-aged women with dark brown hair and green eyes (in fact they look very similar).  They always keep a wand or two in their belts as they are tending the bar.  Svarnos, remembering that they were wizards, asked if they knew anything about fixing their torn Bag of Holding.  The sisters looked skeptical that it would be possible to fix.  It was at this point that Leanna remembered that someone was looking for a party matching their description.  She said a ranger named Eldan was looking for them and if they wished they could seek him out at the Jaded Unicorn in Berengel as he would be there for the rest of the month.  This excited the heroes, as the last they heard of Eldan was that he was gathering information about the ruins of Riveon.  They intended to meet up with him as soon as possible.  Gjord, Martijn, and Galifynakus then decided to have a drinking contest.  They purchased a whole bottle of Hadramoorian Firewater (this is what drew the Hadramoorian knight into the challenge) and began taking shots.  Beruna called out that a drinking contest was going on and some of the patrons of the inn gathered round and started placing bets.  Many shots later Martijn passed out, followed by the dwarf, and the barbarian won the contest.  In fact he proceeded to finish off the whole bottle!  The crowd applauded as Galifynakus broke into a drunken song.  The sisters said that his feat of drinking would be remembered for some time at the Laughing Ogre.
3rd Day, Goldengrass the 10th, 1845
The next day the party (with some hung-over members) explored the city and purchased some new provisions, clothes, and even masterwork weapons with their newfound wealth.  Later in the evening they went back to Rumil who showed them the fantastic results of his work.  The sapphire was now a true treasure expertly cut and as they held it in their hands it reflected the light into bluish rays like a thousand distant stars.  Rumil thanked them again concerning his daughter and he said that he would be returning to Avaneth shortly so they probably would not see each other again although he hoped that one day they would.  They party returned to the city and spent another night at the Laughing Ogre (stabling their horses this time). 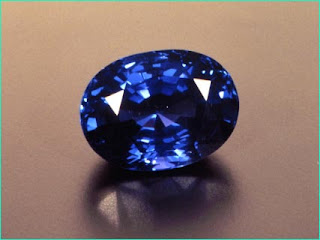 4th Day, Goldengrass the 10th, 1845
to
6th Day, Goldengrass the 12th, 1845
It took two days to travel to Berengel by way of Grisoan.  Grisoan proved to be a small wood and earthwork-fortified town.  The place had a feeling of a large barracks as it was populated with many soldiers.  This town was staging area for the constant watch upon the lands to the north that are under the dominion of the Shadow Dragon.  They stayed at the Golden Barrel Inn.
On the way just outside Berengel they passed the tower of Aness the elven sorceress.  They were a bit wary encountering her just yet however due to what Lono saw in his feywine induced dream. (See comments for the dream.)
They finally arrived in Berengel by noontime.  They finally met up with Eldan at the Jaded Unicorn and this is what the weather worn ranger told them.
Eldan 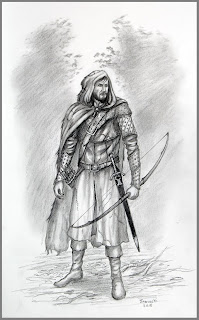 He had been scouting the area around Riveon and he had even entered the citadel itself.  The outer city wall of the ruin was mostly still intact except for two places upon its northern side facing the River Arcas.  Orcs patrol the walls, which are battlemented stone and stand 20’ tall with 30’ guard towers at various intervals.  Inside most of the buildings are burnt out, collapsed due to neglect, or just rotting husks.  Some are being used as barracks, warg stables, storage, and smithies.  Creatures that Eldan saw other than orcs included, wargs, goblins (that seemed to be subjugated by the orcs), ogres and a vicious larger breed of what looked like some sort of monstrous orc.  For lack of a better name Eldan called them “Black Orcs”.  Some of these orcs bore shields bearing the dragonhead device – a symbol of the Shadow Dragon.
Eldan said that there was a fortress in the center of the city with a high tower rising above it.  The top of the tower appeared to be made of glass and iron like a large domed greenhouse.
Eldan was discovered and barely escaped with his life.  He used an old ranger trick and used black pepper to hinder the scent trail of the wargs.
Some days later he captured a lone orc and got some information out of him before he sent him to the Nine Hells.  There is a ruler of the ruined citadel that the orc called Gorthukon (which means master in orcish) and from what the ranger could gather he does not think it is an orc.  The main fortress is only manned by the “Black Orcs” no other orcs are allowed within.  The orc was also afraid that if he told too much the master would feed him to his pet, which he seemed terrified of.  The descriptions that the foul creature gave Eldan were vague but Eldan thinks it may be a dragon of some kind.
After his scouting mission Eldan traveled to the city of Senion to visit the great library there.  He hoped to find maps or other pertinent information about Riveon.  He found nothing but a list of names of designers and architects of the city and the great fortress.  He saw that all were human and most assuredly long dead except for one who was a dwarf and possibly still alive.  The dwarfs name was Brognor and he was actually a somewhat famous architect having designed a great many structures in his time.  The ranger went to the local stonemasons guild and discovered that the dwarf was alive and living in Senion!
Eldan found the dwarf and the poor old coot was quite senile.  His son was taking care of him and helped Eldan in his conversation with the dwarf.
The Maps of Castle Riveon 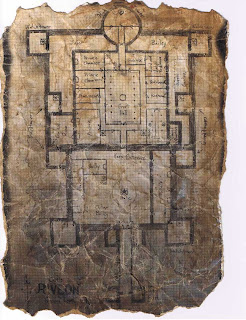 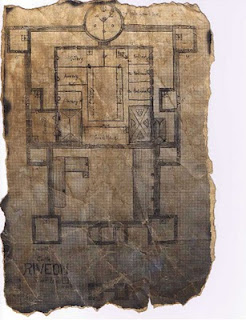 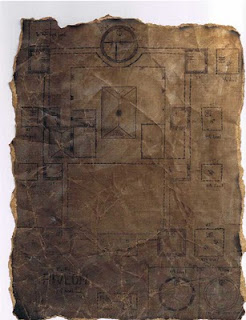 Posted by Eugene Jaworski at 2:38 PM No comments:

Give your characters some personality. 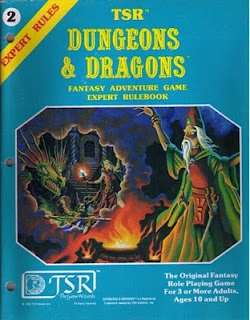 This is a great article that I found that could really help you develop your characters backgrounds. Remember in our game that role-playing your character well is a major factor in how much experience points you receive each gaming session.  Give it a try, I started using the article for some of the non-player characters in the game and it was fun to do and has really helped in fleshing them out.


http//www.neothera.com/Give your character some personality.pdf
I'll be posting stuff like this occasionally in case your in the mood to do something D&Dish between gaming sessions.
Posted by Eugene Jaworski at 8:52 AM No comments: 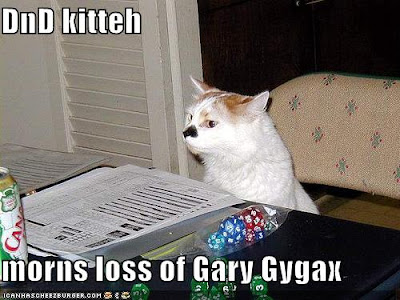 A romantic song about D&D
http://www.youtube.com/watch?v=Rc3byq9y_OQ
Posted by Eugene Jaworski at 10:31 AM No comments: