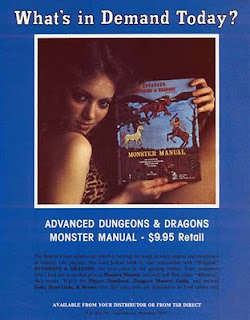 Just wondering when our next foray into Malavon will be taking place.  You guys did exceptionally well last time considering all the horrific battles you went through.  You should be getting some decent experience points.
By the way the girl in the ad is actually one of Gygax's daughters.  (Not bad Gary - ROWR!)
Posted by Eugene Jaworski at 8:15 PM No comments:

The Story so Far.... The Ruins of Riveon

1st Day, Goldengrass the 23rd, 1845
The adventurers are deep in the heart of the ruined citadel of Riveon.
Long ago the forces of the Shadow Dragon Zorvoath laid waste to the city and it is now under the dominion of a foul horde of orcs and other goblinoid creatures.  Some power holds these chaotic creatures together as it is unusual for them to keep from cutting each others throats.  So now, our intrepid party along with Eldan the ranger, Norgrim the dwarven bard, and the ever faithful Tursan are ready to explore the mystery of this fallen city and put an end to the evil.
The ranger Eldan, in his previous foray into the dire citadel, learned from an orc that he took prisoner that they have a master that they greatly fear called Gorthukon.  From what Eldan could tell he thinks that this may be a  shaman or wizard but he couldn't be sure.  The orc also let out that the master has a "pet" that is almost as feared as he is.  Eldan said that the description was vague, but it is possible that the creature could be a dragon.
In his quest to discover more of the lore of Riveon, Eldan discovered a secret way into the central fortress from a senile old dwarf in Senion.  There was a secret tunnel from the Curthor tomb in the city's cemetery to the chapel within the castle itself.  A way to strike at the heart of the enemy!
The dwarf even gave him some old maps of the castle as he had been one of the architects that had designed it.  Armed with this knowledge Eldan felt confident that a small party of bold heroes could make a difference in Riveon where an army could not hope to assail it.
The adventurers remembered another reason why they were braving the perils of the city.  The sorceress Aness had told them that she believed that a Shadow Cylinder (see previous posts) may be found within the city.  She learned that Cyndara the court illusionist of Riveon had one in her possession before the downfall of the city and it was possible it was still there.  If the party could retrieve this, Aness would have all three of the mysterious cylinders that contained a secret so great that she cast the geas upon the party so that they would tell no one.
Aness believed that this Gorthukon the captured orc spoke of could possibly be Illnath, Cyndara's apprentice that was believed to have betrayed his city and his mistress on the night the Shadow Dragon attacked.
With Lono leading the way the party sneaked into the heavily guarded city through destroyed sections on the north side of the surrounding defensive wall — a legacy of the city's downfall.
Svarnos, showing his usual resourcefulness,  found a way to get a birds eye view of the layout of the city.  Using the magic wand of levitation found in the ruins of Gormoon's tower he levitated his familiar cat Jarvis high into the air to report back to him what he saw.  In doing this Svarnos was able to get a good idea of the layout of the city and even found the location of the cemetary.
Inside the city they found a once glorious place run to rot and ruin.  There were burnt out and collapsed buildings and rotting husks of homes once populated by the men and women of Riveon.  But not all the buildings were left derelict.  There were barracks and worg stables for the awful orc soldiers.  Smoke rose into the sky from forges and cooking fires.  The party even found a church once dedicated to Varcan being used by the orcs for rights to their evil gods.  Fionnula the Sister of Varcan led the way in making the orcs regret their sacrilege and  not one orc in the church was left breathing.
So, the party wove a stealthy path through the city.  They encountered ogres, goblins, worgs, and in addition to the typical orcs there was a larger black-skinned breed that fought like devils.
Slowly, the party was making its way to where they believe the cemetery to be.  Suddenly, in the distance, the sound of orcish horns sounded answered by the howl of the wicked worgs.  Dusk was settling over the broken towers of the city but our heroes with weapons drawn and magic as their ally were ready for anything.
Posted by Eugene Jaworski at 7:44 PM No comments: 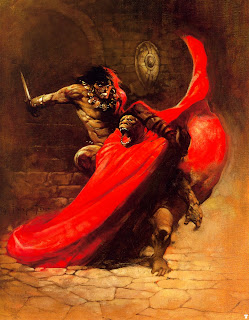 I've been on a Robert Howard kick lately since Alicia and Norb both got me Conan/Soloman Kane related stuff for my birthday.

I think this conversation between the pirate queen Belit and Conan from Queen of the Black Coast best sums up what the barbaric character is all about.  I don't know why but something in it just resonates with me somehow.  Although, on a much lamer level as I haven't done a lot of "slaying" recently and my adventures are just confined to my imagination.

"What of your own gods? I have never heard you call on them."

"Their chief is Crom. He dwells on a great mountain. What use to call on him? Little he cares if men live or die. Better to be silent than to call his attention to you; he will send you dooms, not fortune! He is grim and loveless, but at birth he breathes power to strive and slay into a man's soul. What else shall men ask of the gods?"

"But what of the worlds beyond the river of death?" she persisted.

"There is no hope here or hereafter in the cult of my people," answered Conan. "In this world men struggle and suffer vainly, finding pleasure only in the bright madness of battle; dying, their souls enter a gray misty realm of clouds and icy winds, to wander cheerlessly throughout eternity."

Belit shuddered. "Life, bad as it is, is better than such a destiny. What do you believe, Conan?"

He shrugged his shoulders. "I have known many gods. He who denies them is as blind as he who trusts them too deeply. I seek not beyond death. It may be the blackness averred by the Nemedian skeptics, or Crom's realm of ice and cloud, or the snowy plains and vaulted halls of the Nordheimer's Valhalla. I know not, nor do I care. Let me live deep while I live; let me know the rich juices of red meat and stinging wine on my palate, the hot embrace of white arms, the mad exultation of battle when the blue blades flame and crimson, and I am content. Let teachers and priests and philosophers brood over questions of reality and illusion. I know this: if life is illusion, then I am no less an illusion, and being thus, the illusion is real to me. I live, I burn with life, I love, I slay, and am content."
Posted by Eugene Jaworski at 9:58 AM No comments:

If you guys can please try to post any comments or anything else directly to the Malavon blog.  This way we can all see the comment right under the related post.  I plan on opening the blog so you all can create your own posts.

Thanks
Posted by Eugene Jaworski at 5:26 PM No comments:

D&D This Weekend, Monster Counters, and New Art at Neothera!

Looking to get a session of D&D in on Saturday or Sunday evening.  Alicia is free so let me know.  I'll be putting up a brief synopsis before Saturday.


The Monster Counters site is up and running! 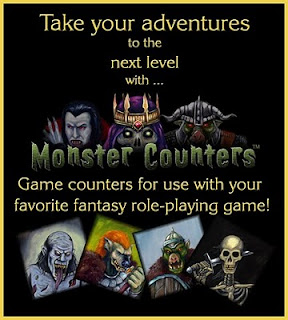 Here is the link http://www.monstercounters.com
Also, enjoy a new painting I just added to Neothera. 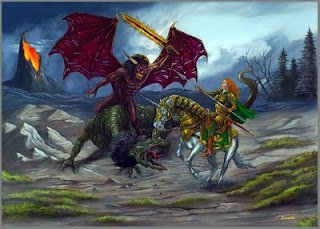 The Dark and the Light
Posted by Eugene Jaworski at 5:22 PM No comments: