Thanks for coming out and trying out the playtest on Saturday.  I was surprised that the pre-generated characters survived considering that they marched right into two of the most dangerous areas of the Caves of Chaos (the Owlbear den and the Minotaur's maze).  I would like to see how they react to some of the less formidable creatures of the caves.  I don't know weather it would be feasible, but I would like to have at least one more session before I give my feedback.  Remember that you can give your feedback as well.

One thing that I did notice was how there were no rules for disengaging from combat allowing characters to dart in, attack, and then step away from an enemy with no repercussions. This was also due to the fact that characters (and monsters) could break up their movement every round instead of the traditional move and attack or attack then move.  It allowed for a more dynamic flow to the battle but I can see how this might be abused by both players and their adversaries.  "Tim the Enchanter" used this to great effect although he did get himself gored by the Minotaur.  This was a playtest after all so all the rules aren't in place yet, I guess we'll just have to wait and see.

Here's a great article from the designers that goes into the choices that were made for the playtest. It helped clear up some things for me and I think you might find it interesting.

I'm always looking for dates to play our Malavon campaign, so as usual let me know.
Posted by Eugene Jaworski at 7:30 AM No comments:

These sketches are going to be the foundation for my paintings for the 5th edition D&D art test.  The images are in line with the guidelines of the art test so they are not really original ideas.  One is a shaman of some monstrous humanoid race, one is a night watchman from a northern clime (with a pseudo-Slavic influence), and the last is a temple in a cold rocky terrain. Hope you like them... paintings soon to follow. 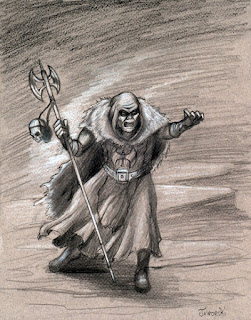 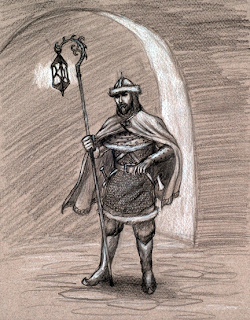 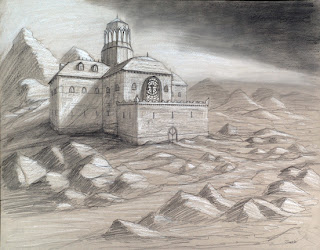 Posted by Eugene Jaworski at 5:36 PM No comments:

The 5th Edition public playtest is coming up on Thursday May 24th.  Apparently it will have pre-generated characters and the scenario is the classic Caves of Chaos from the original Gygax module Keep on the Borderlands.  I'm hoping that three of us could get together to try it out (If four of us were around we'd be playing our D&D!).  I'm looking at Saturday night. Let me know if any of you are available.

In the meantime here is an interesting article about it from Wired.
Where is D&D headed next?
Posted by Eugene Jaworski at 6:57 PM No comments:

Den of the Lizardmen 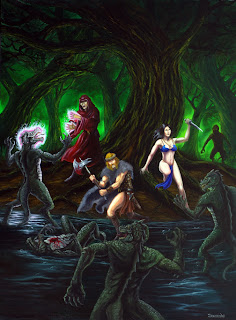 Posted by Eugene Jaworski at 2:12 PM No comments: