The heroes awoke early and groggily the next morning and with a farewell to the elf Tharivol and the innkeeper Garam they mounted their horses and took off out the southern gate of Wychton. They hoped that they would reach Miragar before sunset as they feared another attack by the minions of the Shadow Dragon.
The land south of Wychton was less wild and forbidding than the terrain north of the town.  It consisted of rolling green hills dotted with copses of trees and the fall air of the month of Redleaf was crisp and clean.  Although, to the east the party could still see the line of the imposing Ironstorm Mountains with its ever-present thundering storm clouds looming above them.  As they travelled south the party began to see farmsteads and rows of ripe crops soon ready to be harvested.  The hard packed gravel road to Miragar was also well maintained so travel was easy.  As they got nearer to Miragar the wind shifted and began to blow from the south bringing with it the salty tang of sea air.
Miragar could be seen far in the distance as the adventurers topped another low hill and fields of wheat flanked the road. The sun was now low in the west, sunset was not far off, and it seemed that the party would make it to Miragar without incident. 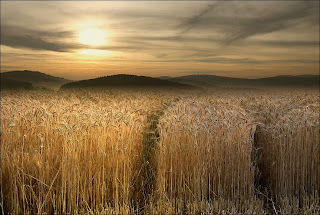 This was not to be so.  Ahead the adventurers could see that the wheat on the right hand side of the road was moving and swaying as if something, or somethings, were making its way through it towards the road ahead of them.  From out of the wheat came a pack of what seemed to be large black dogs that ran snarling right towards the party.  As they got closer it could be seen that these were no natural creatures.  These creatures had smooth black coats and they stood more than two feet high at the shoulder with diabolical almost humanoid faces and maws full of sharp teeth. 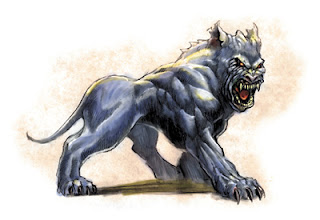 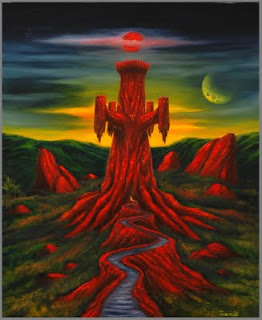 Posted by Eugene Jaworski at 7:02 PM