The Story So Far XI

The sapphire was now in their hands and the adventurers were preparing to leave the dungeon.  The party ascended to the main level of the dungeon via the imposing Medusa statue that served as an elevator into Gormoon's treasury.

Svarnos, looking at the map he had made of the dungeon, realized that there was quite a bit more of the place to explore.  This resulted in a debate where some of the party wanted to leave the dungeon and some wanted to continue exploring.  Gjord, Svarnos, Galifynakus, and Martijn wanted to stay and Lono and Fionnula wanted to leave.  Lono's voice was the loudest in opposition to continuing as he felt that they had found what they had come looking for.  He was out voted however as even Fionnula was convinced to stay once Gjord said that there were probably more bugbears and gnolls in the place and that they had promised the grigs that they would rid the dungeon of their evil presence.  Fionnula said that they should only stay one more day and it was agreed they would do so.

They explored the rest of the dungeon (with Lono complaining most of the way) and its stony halls seemed empty and barren.  In some rooms they found empty chests and other signs of a desertion.

They came upon a locked oaken door and listening at it they could hear the sound of someone humming a somber tune.  Gjord figured that their elusive enemies could be behind the door and began to formulate a plan of action.  Martijn, who was tired of skulking around the dungeon, suddenly banged on the door with his mailed fist and shouted, "Open in the name of the Knights of Hadramoor!"

A weak gruff voice answered from beyond the door saying, "I would if I could."

Lono picked the lock on the door easily and the party entered to find a three celled prison.  In a cell on  the left was a disheveled looking dwarf with black hair and brown eyes grinning at them through the bars.  In the cell furthest to the right however was a strange beast.  It was a six foot tall humanoid creature with  green scaled skin and the head of a large lizard.  It stared at them with its long forked tongue flicking occasionally from its mouth. 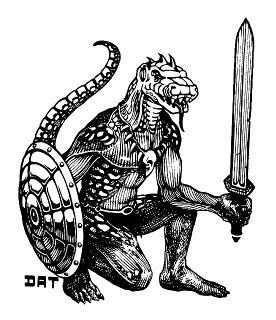 They freed the dwarf (Lono again showing off his thief skills) whose name was Norgrim and he was a bard by profession. Norgrim was extremely grateful and the party gave him some rations and water.  They asked him about what happened to him and if he knew anything about the lizard creature.  He said that the lizard was brought in and thrown into the cell by the bugbears a little after he was captured. It turned out that the dwarf was a member of Devinal's party that was captured in the woods some days ago.  Norgrim was aggrieved to hear of the demise of his comrades but he seemed to hold the same opinion as our heroes about the halfling rogue Devinal.  The party also returned Norgrim's equipment which they had found earlier in the adventure.  He was happy to get his drums back as he told them he uses them for his bardic magic. He then proved this by drumming lightly upon the skins and humming a little tune which cast some healing spells upon the party members that needed it.

Gjord asked the lizard creature who he was and the creature hissed something back at him in a strange language.  Astonishingly, Svarnos found that he could understand it for the creature was speaking Draconic.  Svarnos (using Draconic) asked the lizard if he was a troglodyte. The creature seemed insulted by this and he said that he was one of the lizardfolk a "lizard man".  He said that his hunting party was attacked by gnolls near his tribes village which is located by the river in the northwest section of the woods.  The hunting party was slain and he was captured for some reason unknown to anyone accept the gnolls.  They found out his name was Nahhssahn and he said that if they set him free he would help them fight and would be indebted to them. The adventurers set him free and they continued onward with lizard man marching next to them.

They proceeded to the armory that they found before to find some weapons that the lizard man could use.  The creature took a wicked wolf spear and Gjord decided that they could take some more weapons as they now had what they thought to be a magical "bag of holding".  He proceeded to stuff a halberd into it when he saw the point of the weapon puncture through the bottom of the bag. The party was stunned as the magical purple and gold trimmed bag looked now quite useless.  Fionnula said, "Good one Gjord."  The dwarf mumbled something about getting a wizard to fix it.

Before leaving the dungeon the party decided to check the griffin statue room one last time as they felt there was some unfinished business there.  Now that they possessed the blue iron key they were not disappointed.  A mouth appeared in the center of the circle on the stone floor and spoke these words.

"In this room, my apprentice, you will learn to conquer your fear by either spell or will.  For nothing is more important to a true wizard than courage. You may think it to be intelligence, but you will learn it is your fearlessness.  For one day you will face the power of the Elemental Planes and perhaps that which lies beyond them."

The mouth them disappeared and would reappear every time they left and reentered with the key.  They could make nothing of the wizard's message however and they made their way to exit the dungeon.

The group made its way back to the spider den from whence they first entered the dungeon days ago. They noticed that the secret door which leads to the spider den was slightly ajar but they reasoned that Devinal had left it open when he fled the dungeon. The heroes had been fighting and exploring all day and now they were ready for a peaceful rest under the trees of the Ivy Forest under the watchful eyes of the grigs.

Gormoon's dungeon was not finished with them yet, however. The denizens had discovered how the party had been entering their underground stronghold.

As they made their way through the spider den they were ambushed by a force of gnolls, bugbears, and fierce dire hyenas controlled by their gnoll handlers with whips. One of the bugbears was a huge monster and probably the leader of the hairy brutes. Our heroes were in for an deadly battle.

It was a grim fight and but the might and magic of the heroes overcame their enemies.  Galifynakus was locked in battle with the bugbear chieftain and he was sorely wounded and almost slain but he was saved in the nick of time by his comrades and the clerics healing spells.  Fionnula cast a Bless spell to provide divine assistance to her party and Svarnos used his Sleep spells to help turn the tide of the conflict. Martijn, Gjord and Tursan both took the battle to the enemy and Lono tried to back them up with his sling.  The party's newly found friends Norgrim and the lizardman Nahhssahn both helped in the battle with Nahhssahn doing his best to aid Galifynakus against the bugbear leader.

The battle being won, the creatures were searched and the bugbear leader had a trove of treasure upon him. The party finally made its way out of the dungeon.

They met the grigs in the forest and told them all that happened.  The grigs were elated to hear of the demise of the evil creatures. The Ivy Forest was now made safe for them and they thanked the heroes prodigiously.  They offered to keep watch for them as they slept and they invited them to come celebrate the Festival of High Summer (which was fast approaching) at the grove of a good druid named Galthran.  The party decided they would take a respite from adventuring and join the grigs after their night of well deserved rest under the eaves of the Ivy Forest.

The next day the party awoke late in the afternoon and after breakfast and the casting of some healing spells by Fionnula and Norgrim they were ready to go.  Before setting off the lizardman Nahhssahn told them that he would now return to his tribe that lived near the Arcas River.  He thanked them again and the party thanked him for his help in the battle of the previous day.  The lizardman then sprinted off into the forest.  The party then set off to the druid's grove. It took two days to reach the grove and the travelers were able to appreciate the sylvan beauty of the Ivy Forest at the height of summer.


They arrived at the grove of Galthran the druid. Galthran is a tall brown haired and bearded man with a kindly face. He wears a strange armor that looks like it is carved from some sort of dark colored wood. He greeted the adventurers warmly and he seemed to be familiar with their exploits in the forest. They learned that he was a druid of Duvarion the Gray Unicorn. He invited them to stay at the grove as long as they wished.

The grove was a large clearing surrounded by ancient maple trees with a small hill at its center crowned by a group of six carved standing stones that stand over 10' high. The stones carved with totemic animal shapes. There was a long wooden lodge at one end of the clearing. The inside turned out to be quite comfortable furnished with tables, stools, and straw pallets to sleep upon. There was a huge fire-pit at the center for warmth that vented through the center of the roof. Here they met two young druids, Galthran's acolytes named Faysa (a comely blonde woman) and Ulath (a slight fellow with dark hair). They were fed and they soon questioned Galthran about some of the treasures they found as he seemed to learned in such matters.

They spent the next few days recovering from their harrowing adventure, enjoying Galthran's hospitality, and awaiting the beginning of the Festival of High Summer when the strange  moon Wyrlos would rise with a ochreous hue into the night sky and the revels would begin.

Posted by Eugene Jaworski at 5:57 PM No comments: